Exciting plans for the Commonwealth Games 2022 aquatics centre in Sandwell – including an Olympic-sized swimming pool – are announced today.

Sandwell Council is proposing to build the centre at Londonderry Playing Fields in Smethwick, providing a state-of-the-art leisure facility to serve the local community for decades to come.

The centre would feature an Olympic-sized competition swimming pool and a 25m diving pool, plus 5,000 spectator seats. 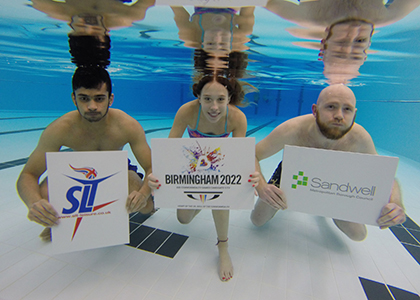 Also planned at the centre – which would be run by Sandwell Leisure Trust – are two activity studios, a 12-court sports hall, a 125-station gym, a 25-station ladies-only gym, an indoor cycling studio, a sauna/steam room and a café.

The council will now put the proposal to the Commonwealth Games Federation.

Announcing the plans, Sandwell Council leader Councillor Steve Eling said: “The Commonwealth Games is going to be a fantastic, once-in-a-lifetime opportunity for the West Midlands.

“Here in Sandwell, we are very proud to be part of it and to be chosen to host the aquatics centre, which will include diving and swimming events.

“The eyes of the world will be on Sandwell and the benefits to the local economy will be huge with significant investment into the area and athletes and visitors from around the globe.”

Councillor Eling added: “We were already looking to improve swimming facilities in the south of the borough. With the Commonwealth Games coming to Birmingham, we will now be able to build an even better new leisure facility to serve the local community for decades to come.

“I am delighted we can now announce our proposed site for the centre. Londonderry Playing Fields is well-placed to meet the needs of local people and is in an area highlighted as having a high demand for a swimming facility.

“Our proposals will need planning permission and there will be full consultation with residents and businesses.”

The proposals will be considered by the council’s Cabinet on 31 January.

If approved by Cabinet, the proposals will then be subject to a planning application, which would include detailed consultation with local people.

Sandwell Council has been working for a long time to improve swimming facilities across Sandwell, building new centres in Wednesbury, Tipton and West Bromwich over the past five years, plus Portway Lifestyle Centre, Oldbury, which includes a hydrotherapy pool.

Through its Select Committee for Leisure Provision, the council has worked with organisations like Sport England to look at leisure across the borough and held a public consultation. This highlighted the need to improve swimming facilities in the south of the borough.

Subject to planning permission being granted, the council will work to provide adequate alternative spaces for any playing fields lost at Londonderry.